You are here: Home / Diabetes advocacy / Clarity regarding the symbol for diabetes

Until 2006 there was no single symbol for diabetes. In that year, the United Nations adopted the blue circle as the international symbol of diabetes. Before that, many people in the diabetes community used a grey ribbon.

Ribbons had been used for causes like AID and breast cancer. There was hope in the diabetes community that using a grey ribbon would bring that same recognition for people living with diabetes.

The grey ribbon eventually had a drop of red added to it. This was further meant to make the diabetes symbol stand out. As ribbons gained popularity, a third option was warn. The red ribbon representing the American Diabetes Association was being used by some people.

In 2006, the International Diabetes Federation put out a call to create a new diabetes symbol. They wanted a symbol that would be recognized by everyone in the world. Kari Rosenfeld and her daughter Clare had just the symbol. They created a blue circle.

Why is a blue circle used as a symbol for diabetes?

The blue in the newest diabetes symbol represents the sky and the flag of the United Nations. According to Diabetes Mine, the circle “symbolizes life, Mother Earth, and health. The unbreakable unity it represents mirrors the global diabetes community.”

On December 20, 2006, the United Nations passed the “World Diabetes Day” resolution. It was on this day that the blue circle was officially recognized worldwide as the symbol of diabetes.

Download a variety of FREE diabetes awareness images using the link below.

But is there a diabetes awareness ribbon?

Again, before 2006, many people used a grey or red ribbon to symbolize diabetes awareness. After 2006, some individuals have created ribbons using both grey and blue colors. For the most part, in the diabetes community, ribbons now tend to be replaced by blue circle pins.

Is there a different symbol for type 1 versus Type 2 diabetes?

Is there a standard diabetes awareness tattoo?

In a further effort to raise awareness of life with diabetes, more and more people are getting diabetes tattoos. When it comes to diabetes ink, people are encouraged to be as creative as they like. There are tattoos of insulin pumps, tattoos incorporating the grey ribbon, ones that use the blue circle and so many more!

If you are considering a diabetes awareness tattoo, our tattoo gallery may help to inspire you.

If you have diabetes and are considering getting a tattoo, make sure to read our precautions first.

Is there a special time of the year for sharing the diabetes symbol?

Every day is the perfect day to increase awareness around living with diabetes. You can sport your blue circle or a diabetes ribbon anytime throughout the year.

The month of November is often referred to as Diabetes Awareness Month. November 14th specifically is recognized as World Diabetes Day. The 14th is the day that Sir Frederick Banting was born.

For those who don’t know, Banting was a Canadian born medical scientist.  He received the Nobel prize for his work isolating insulin for therapeutic use with his colleague Dr. Charles Best.

Before 1922, a person with Type 1 diabetes was not expected to live long. The only way for them to survive was on very strict diets and those diets often left them malnourished.  Injected insulin came along and changed that.

Are there other symbols for diabetes?

The two main diabetes awareness symbols are the blue circle and the grey and blue ribbon.  Like all brands, when it comes to diabetes organizations, there are many logos and symbols to choose from. JDRF has used the blue sneaker for many years.   Beyond Type 1 has adopted the dotted tear drop.  Children with Diabetes has the yellow smiley face.

Here at Diabetes Advocacy, our symbol has evolved from a phoenix with a grey ribbon around it’s neck into the phoenix with the blue circle.

The phoenix was chosen to reflect our rising from the devastation of a type 1 diabetes diagnosis and embracing the community we are part of. The blue circle further represents our continued involvement in and commitment to the diabetes community. 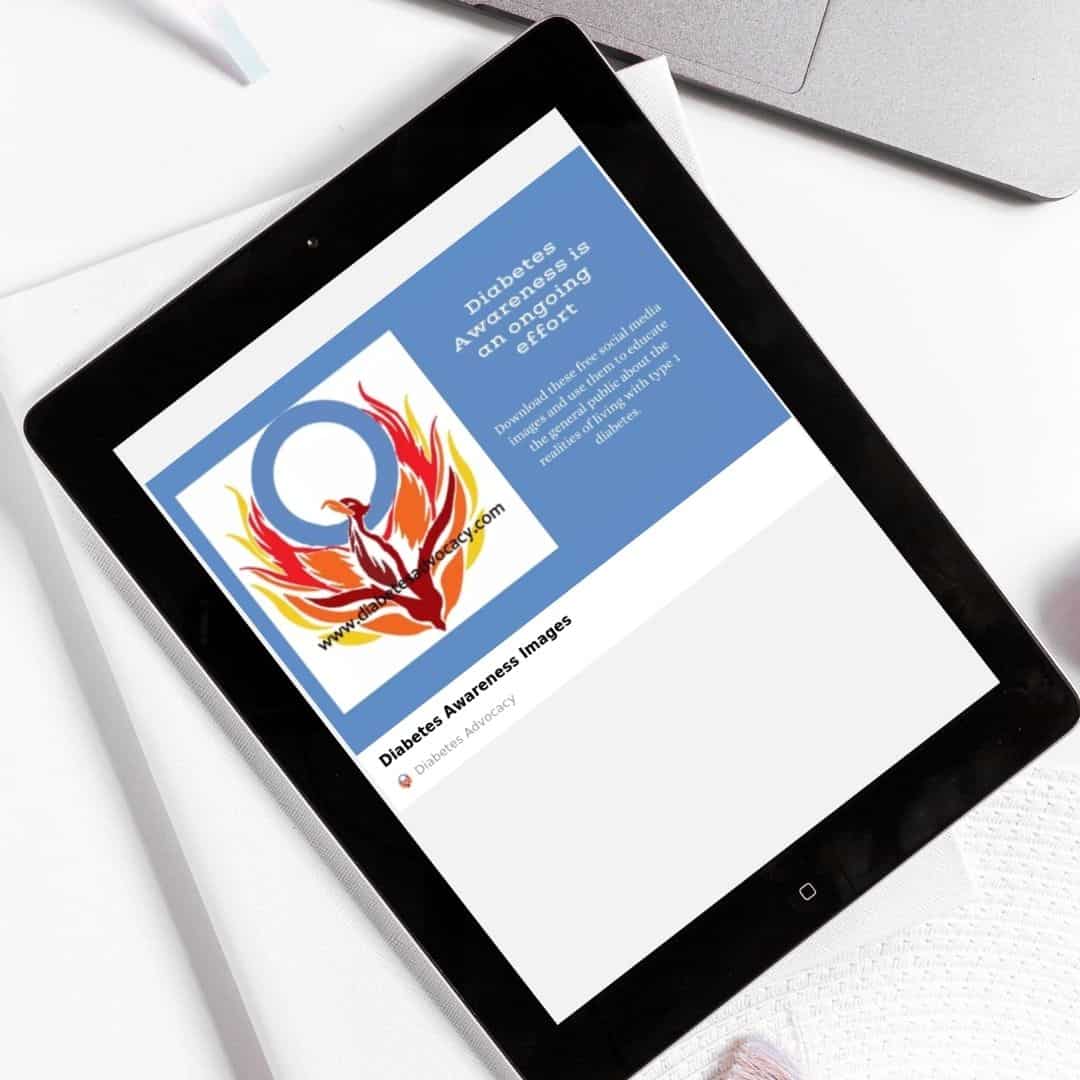 This website uses cookies to improve your experience while you navigate through the website. Out of these, the cookies that are categorized as necessary are stored on your browser as they are essential for the working of basic functionalities of the website. We also use third-party cookies that help us analyze and understand how you use this website. These cookies will be stored in your browser only with your consent. You also have the option to opt-out of these cookies. But opting out of some of these cookies may affect your browsing experience.
Necessary Always Enabled
Necessary cookies are absolutely essential for the website to function properly. This category only includes cookies that ensures basic functionalities and security features of the website. These cookies do not store any personal information.
Non-necessary
Any cookies that may not be particularly necessary for the website to function and is used specifically to collect user personal data via analytics, ads, other embedded contents are termed as non-necessary cookies. It is mandatory to procure user consent prior to running these cookies on your website.
SAVE & ACCEPT
283 shares