I finally finished Leighann Calentine’s book Kids First Diabetes Second.  That is not to say that it was just so boring that it took me forever to read.  Its a reflection of the fact that I just don’t have enough me time to read, I was trying to read three books at once AND there were not enough 3am lows to add to my reading time. 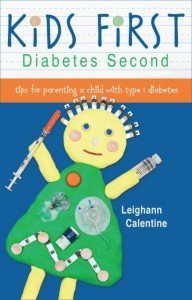 The book was a bit of a surprise to me. I know that probably sounds rude but I was not expecting a lot.  I really didn’t know much about Leighann prior to this. Having read her blog on occasion, I knew that she was a fellow Diabetes Advocate but she had only been dealing with the D-monster for four years.

After living with diabetes for too many years, I am a bit more crass.  Would she be able to keep my interest? The answer was a resounding YES! She did a great job explaining things and then used a fabulous panel of experts to help fill in various areas.  The balance was brilliant and this is definitely a book that should be given to every newly diagnosed family at least.

In reading the book, I once again had a million little pieces of paper marking things that I wanted to write about in a review.  There are so many little bits of things that I thought were interesting that it’s going to take more than one blog post! Since I finished the book last night, I decided to start at one of the last sections that made me laugh and taught me a few things.

Kids First Diabetes Second dedicates an entire chapter to “The Language of Diabetes”.  We all know that diabetes has its own language.  It’s funny to watch the response of people when we look at our teen or our toddler and tell them “You had better be high Mister!”  We laugh at ourselves and know our kids love it when we ask them to give us “the finger”. 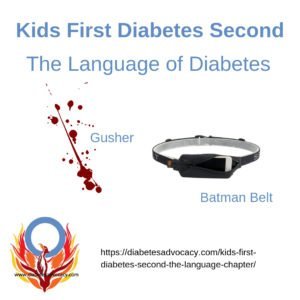 These were found in the book as well as many more. Being a diabetes dinosaur, there were a lot of terms that I just didn’t know! I love the “Bateman Belt” which we used to just refer to as his pump pouch.  With kids using Spibelts and other pouches that can hold so much that the term had to be expanded.

I laughed when I saw “diabeetus” and the fact that it causes an eye roll in many.  You know that that is how I pronounce the dreaded word right? I don’t know if its a Barb thing or perhaps Wilfred Brimley and I just have some sort of weird connection but to me the “diabeetees” thing sounds just as odd.

I learned about Flat-lining and dreamed of it happening to my son one day.We don’t have a CGM so I can only imagine how great it must be to see.

We have experienced both definitions of a gusher.  There was the time when blood spurted from his finger across the dining room table and landed in his brother’s soup. We have also had sites that poured out so much blood that I thought he may need a transfusion. My son that it was no big deal!

The term “Old school” killed me.  I am not that old…really…I think….but we don’t use Continous Glucose Monitors (read cost factor and access issues) and I love a paper log. While I am working really hard to move away from one, the idea of downloading pumps and meters? EEEK!! It is just so hard for me to do. (Actually, she states that the term refers to people who go back to these ways and not to those of us still stuck there)

I remember learning about SWAG and YDMV when I first joined the CWD parents list.

This chapter was full of great stuff. At the end of it, the author notes the importance of not looking at numbers as “good” or “bad”.  That is so hard.  I never judge my son by his reading. We do have the debate on whether we have been effective pancreases or not.  We use readings as a learning tool now that he is a teen.  When he was younger, they were Mom’s grade and Mom’s responsibility.  “Mom failed you.” would be the guilt that ran through my head. I would not tell him that but it was how I would feel.

As Leighann and many before her have said, our children are so much more than a number. Readings are vital to their health and their well-being but they are just a tool. Its vital that we teach them that as well as helping them to flat-line!

Stay tuned for more great insights and commentaries on Leighann Calentine’s Kids First Diabetes Second….or go and order your own copy so you can find all of the good parts for yourself!

Please note that this post does contain affiliate links. If you purchase Kids First Diabetes Second by following our link, you will be supporting the continued work of this page.

This website uses cookies to improve your experience while you navigate through the website. Out of these, the cookies that are categorized as necessary are stored on your browser as they are essential for the working of basic functionalities of the website. We also use third-party cookies that help us analyze and understand how you use this website. These cookies will be stored in your browser only with your consent. You also have the option to opt-out of these cookies. But opting out of some of these cookies may affect your browsing experience.
Necessary Always Enabled
Necessary cookies are absolutely essential for the website to function properly. This category only includes cookies that ensures basic functionalities and security features of the website. These cookies do not store any personal information.
Non-necessary
Any cookies that may not be particularly necessary for the website to function and is used specifically to collect user personal data via analytics, ads, other embedded contents are termed as non-necessary cookies. It is mandatory to procure user consent prior to running these cookies on your website.
SAVE & ACCEPT
0 shares