Are you ready for Hallowe’en?

Are you ready for Hallowe’en?

Home » Welcome to the Diabetes Advocacy Blog! » Diabetes Well-being » Diabetes is harder some days than others

This post was originally written in 2009.  My son now manages his own diabetes care.  He wakes for his lows.  He treats his highs but one thing remains the same–diabetes is hard no matter who is responsible for care for the daily tasks.

It was after midnight and of course I was dying to get to sleep. I had set my alarm for early the next morning.  It would be my son’s last day of school.

I found a meter and a strip. I grabbed a lancet, waded through all of the junk that the boys had left on the stairs rather than putting away. Off I headed to test my son’s blood sugar level. I hope it would be the last check for a few hours. One check and I could sleep!

I took the meter. I lanced his finger. A pool of blood was created. The strip refused to suck.

What the???? Okay, I cleaned the finger. I got more blood. I tried again. The glucometer just barely accepted the blood. I waited for the reading…E5. It was an error reading!!

There hadn’t been enough blood to get a blood sugar reading. Oh the lovely four letter words that were on the tip of my tongue as I headed back downstairs to get more test strips and another glucometer.

I found a new meter. I was certain that this one had to be better than the last. A new test strip was in my hand. The same lancing device was being used. Back up the stairs I went.  This time I grumbled and picked up items as I went by.

Once again, I lanced my son’s finger. Again, I got a large amount of blood. The strip sucked the blood this time! I walked towards the stairs not even considering having to correct a high blood glucose reading. That was a good thing because he didn’t need insulin.  He was 3.2 (57).

I uttered a few more choice words as I shuffled off to get some juice. I filled a glass, found a straw and trudged up the stairs for a third time in less than five minutes.

My son wasn’t keen on drinking. I continued to cajole him until he finally began to sip. Thankfully he drank it all except the last few drops. Those were sucked up into the straw and somehow flew all over his pillow.  I was not happy.  There was now strawberry juice all over a cream pillowcase.  I cleaned it off as best as I could.

Fifteen minutes can become a lifetime when you are dying for sleep. These are the moments when you just think to yourself…diabetes is hard.  Why us?

Eventually, it was time to recheck.  He was  5.5 (99) and I was finally off to bed for two hours before it would be time to check his blood sugar again.

Diabetes is hard.  Diabetes care is a challenge.  Some days things seem okay…and other days you feel like you are a bug squished against a windshield.

If you are feeling overwhelmed by diabetes, join our online group and share your feelings with others who live with diabetes too. 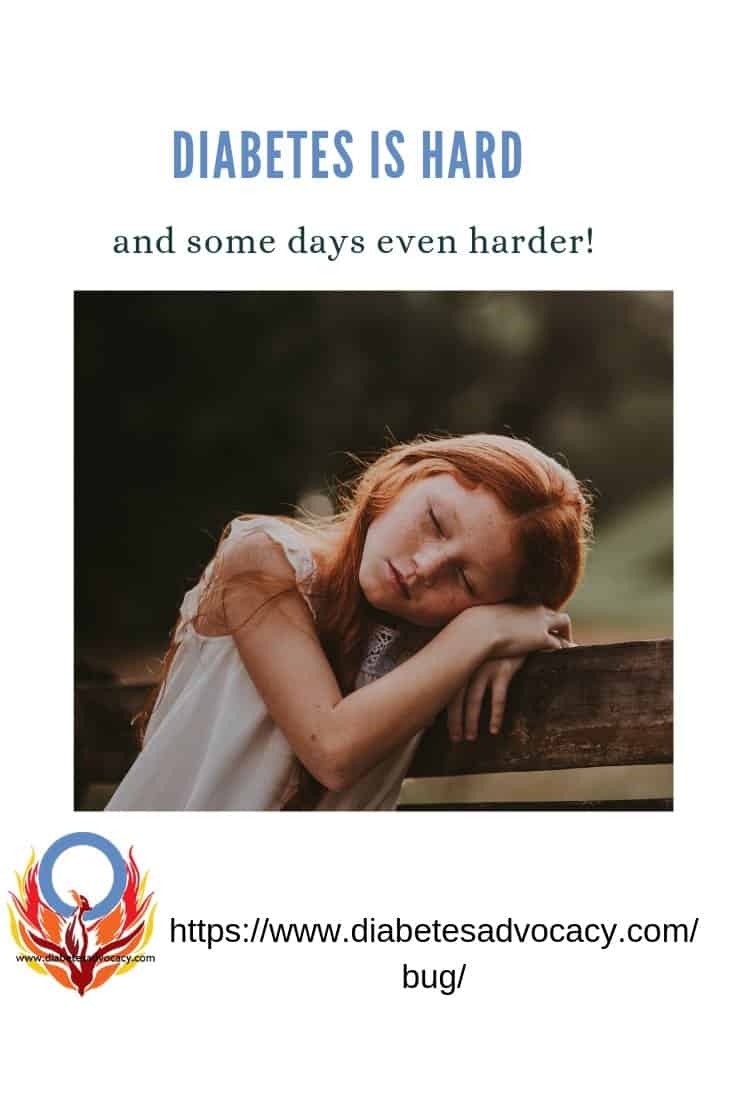 Previous Post: « Tips for Managing Diabetes in the Summer
Next Post: The Disability Tax Credit for Adults with Diabetes »